INCIDENT REPORT: What Part of FREE SPEECH Does Whole Foods Not Understand? 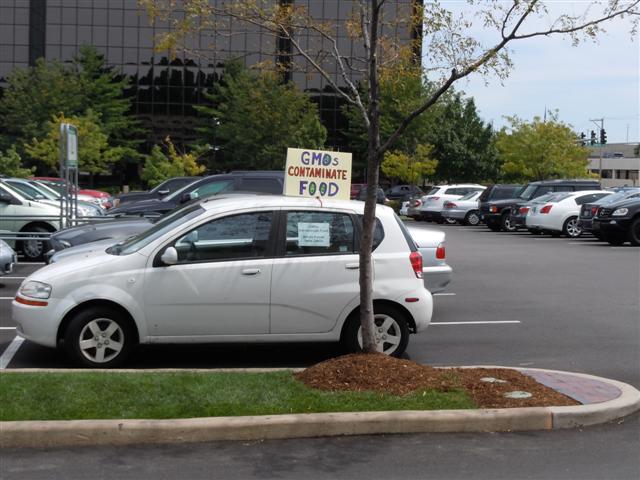 On Saturday August 18 several cars and a pickup truck with signs on top, in the windows or on bumpers drove into the Whole Foods Market (WFM) parking lot in Brentwood, which borders St. Louis, Missouri. Police approached as soon as they arrived.

“Yes, officer, we will take the signs off of the cars if you tell us which ones to remove and which can stay on.”

“Take them all off,” the cop scolded from inside his squad car. 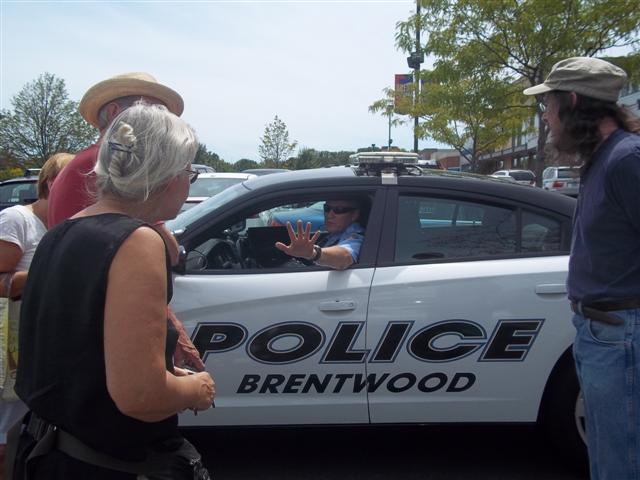 “Could you tell us why some signs are allowed on the top of cars and others are not?” I asked. We thought that the 24” by 16” signs atop cars that said “GMOs Contaminate Food” on one side and “Whole Foods Sells GMOs” on the other side looked great at WFM. There was no apparent difference between our signs and those like “Domino’s Pizza” that regularly adorn cars. A banner on the pickup truck which was five times as large added even more to the décor of parking at WFM. 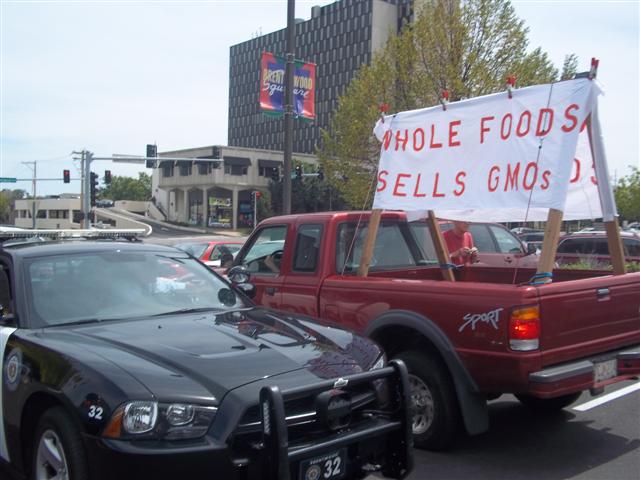 “You can’t have protest signs on your cars in this parking lot!” the cop snapped back. “Do you understand me?”

“Officer, I am trying to understand. Could you explain the difference between a protest sign and one that is not a protest sign?”

“Nothing which is on the top of your cars is allowed in this parking lot.” The cop did not indicate any understanding of what a GMO is or show any interest in learning. This was in sharp contrast to WFM customers, who are more likely than those who shop at other supermarkets to know that modifying genetic structure can be damaging to food. WFM customers are also more reluctant to serve food with GMOs. Yet, they more often have the mistaken impression that food sold at WFM is free of GMO contamination.

“What about a sign on the side of a car or one in the window like this one?” I pointed to a window sign reading “GMOs Contaminate Food — Whole Foods Sells GMOs.”

“It has to come off,” the cop huffed. 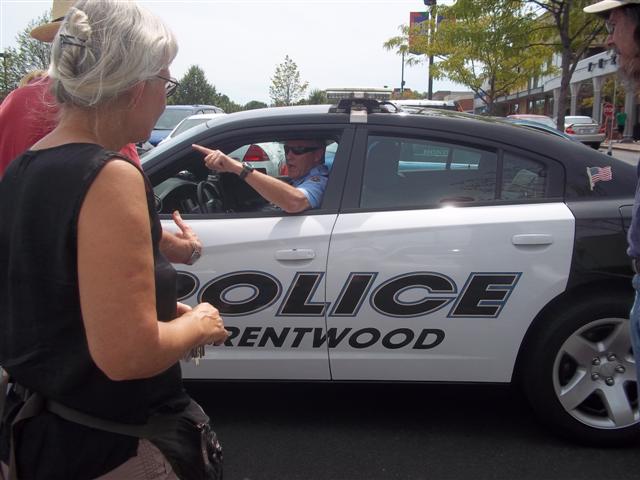 “But officer,” I asked, “we have photos of cars on this parking lot with business slogans on them. Why would a sign like ‘Joe’s Plumbing’ be legal while a sign critical of GMOs be illegal?”

“Because they are protest signs.”

“That would have to be removed” the cop informed the half dozen who had gathered for the conversation.

“Are you saying that everyone who comes to shop at Whole Foods has to remove any bumper sticker saying anything about food quality before they park?” I listened carefully because at least one car had a bumper statement saying only “GMOs Contaminate Food” with no reference to WFM. Do WFM stores across the country intend to ask police to harass every customer making any statement about food quality or Monsanto?

As the discussion continued, cars with the anti-GMO slogans drove slowly through the parking lot. Saturday afternoon is the busiest shopping hour at WFM and it is not easy to find a place for a vehicle. The more the cop talked the more WFM customers wanted to know what was going on. That provided even more opportunity to explain dangers of GMOs. And not just in the parking lot. Customers throughout the store were asking what people with GMO signs were doing and why the police came. 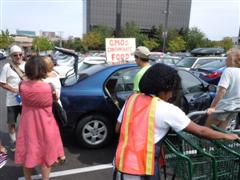 Former employees had explained to us that a central part of WFM marketing strategy is to make the shopping experience as pleasant as possible. While we did not intend to get arrested, the cops seemed at least as hesitant to arrest us. Would handcuffing people in the WFM parking lot for discussing food safety make the shopping experience less than peacefully pleasant for those who watched?

After a couple of more exchanges, the cop changed his mind on bumper stickers. “They would be okay,” he decided. It seemed like a good time to introduce him to the ACLU observer who had joined us. The cop lost interest in pondering the philosophy of law. Soon, he was circling through the parking lot and scrutinizing cars with GMO signs which had now parked. But he made no effort to locate the owners.

At no time did the store manager or security guard of WFM ask us to leave. Apparently, WFM acted stealthily behind the scenes by contacting the local police department. The police, however, became totally befuddled as to how they should enforce what law concerning what violation which might or might not have occurred.

Of course, it was obvious that concerns by WFM triggered police action. Had WFM not run whining to them, there would have been no reason for the City of Brentwood to pay two cop cars to waste two hours in its parking lot.

Known for its high prices, the WFM chain has a reputation for intense anti-unionism and driving competitors out of business in order to monopolize the natural food market. But the reactions of WFM on Saturday August 18, 2012 constituted a novel chapter in its history.

Tolerating GMO contamination of food is not new for WFM. It has a history of supporting FDA approval of GMO contaminated alfalfa as well as packing its shelves with GMO products. 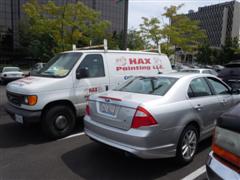 Nor is being duplicitous new to WFM. The chain orders its employees to tell the falsehood to customers that it labels GMO products. In reality, it merely labels products that are GMO free while putting the health of its customers at risk by failing to warn them of food that does contain GMOs.

Interfering with customers’ learning more about GMOs is not a new practice at WFM. The chain has a policy of not allowing “solicitations” in its parking lots, which means it actively prohibits anyone from distributing literature about GMOs.

What was novel about Whole Foods’ response during the St. Louis event was its uncompromising attack on free speech. WFM, in essence, said “Just as workers lose their civil rights when they are on the job, our customers lose their right of free speech when they enter our parking lot. Our workers can only say what we tell them to say. And our customers can only have signs on the top of cars, writing on the sides of cars, posters in the windows of cars, or stickers on the bumpers of cars if the information they convey conforms to the dictates of our thought police.” WFM showed that, in its corporate mind, the suppression of free speech becomes morally acceptable if it is able to get away with it. In WFM-land, might makes right.

After a few tense minutes with the police, most of our group took signs to the sidewalk. But several cars with signs on top of them remained on the parking lot. Two hours after we had arrived, there had still been no attempt to find the owners. While every picket that we’ve had has attracted WFM customers to carry signs with us, the signs atop cars sparked more widespread discussion than anything else we have done.

Whole Foods not the only corporation suppressing free speech 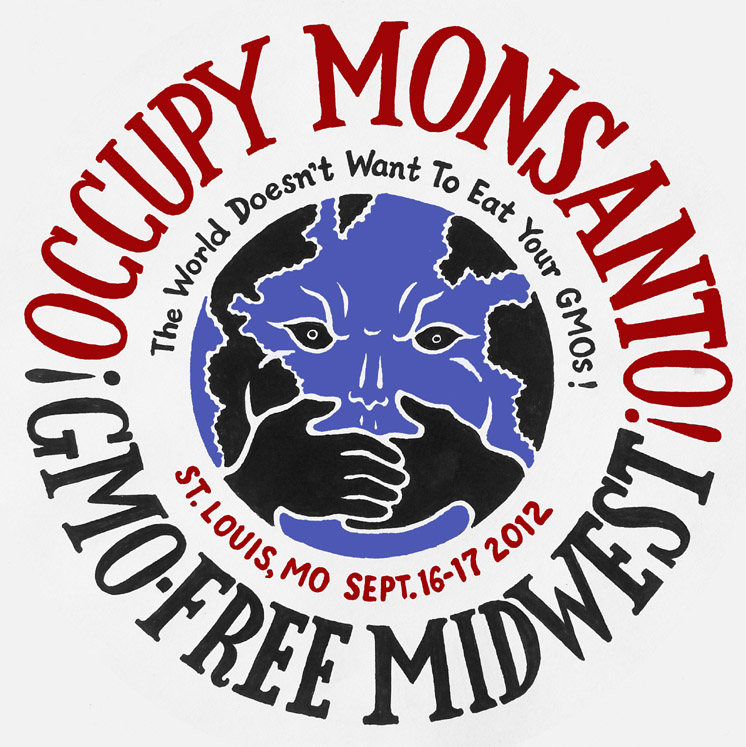 Monsanto, the world’s largest producer and marketer of GMOs, has curtailed critics and lied to farmers and the public about the environmental and human health hazards of this technology. At Occupy Monsanto actions on September 17, 2012, people in many cities will be challenging efforts of the St. Louis food behemoth to use genetic technology to subjugate small farmers throughout the world.

Most recently, Monsanto provoked safe food activists with its intense efforts to block people from knowing what they are eating. In October, 2011, the “Millions Against Monsanto” project organized protests in dozens of cities. The corporation has come back with what could be called its “Millions of Dollars Against Food Labeling” project by funneling over $4 million into efforts to defeat the California labeling initiative in November.

Workshops will explain the basics of GMOs and how genetic technology threatens human health and ecosystems, including forests. The emphasis will be on what is happening to farming, with speakers focusing on Latin America, Asia and Africa. They will look at how Western corporations are turning farmers into vassals who grow food not for their communities but to serve the profit needs of multinational corporations. Participants will hear about the global food industry and how only a small portion of it is actually dedicated to producing nutritious food that people eat. The most significant portion will be discussion of how safe food movements can confront those who putrify our sustenance.

The “sign-in” at WFM was just one of the tactics and strategies that have been developed by those who resist increasing corporate control of food. GMO Free Midwest will be a time to compare notes from each others’ experiences. Please join safe food activist on September 17 (or 16 & 17), if not in St. Louis, then where actions are planned closest to you. Register for the St. Louis event at GMOfreeMidwest.org

This GCU Incident Report was submitted by Don Fitz who’s with Safe Food Action St. Louis and the Greens/Green Party USA. He can be reached at fitzdon@aol.com

If you have an Incident Report, please e-mail it to Incident@Occupy-Monsanto.com