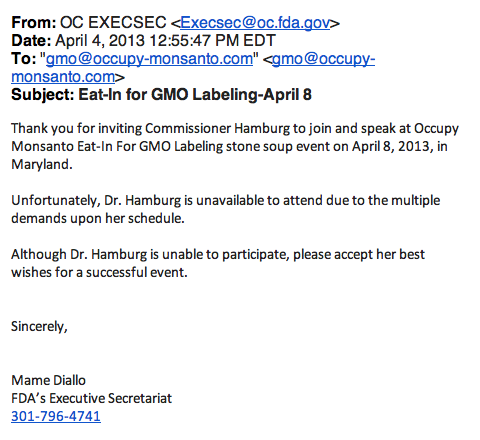 We write to you with the invitation to come join us for some delicious Stone Soup that we will prepare on Monday, April 8, outside the Center for Food Safety and Applied Nutrition in College Park, Maryland. At 1pm we would like you to address our concerns about the labeling of genetically engineered foods sold in the United States of America. We will bring a small public address system and will provide you with an opportunity to speak to those gathered about why the FDA refuses to change its outdated policies concerning the labeling of genetically modified (“GMO”) foods. We promise to be respectful. We are genuinely hungry for answers to our concerns.

As you very well know, your administration purports man-made, patented genetic technology in our food does not constitute a “material difference” to require a byline on a food label. This is a grossly benighted position that has evoked an eruption of public protest and media investigation for over a decade. This position leads us to ask: whom does the FDA aspire to protect? You owe the American people an explanation for why U.S. policy on GMO labeling keeps us ignorant of whether our food has been genetically modified, while citizens in other countries around the world are granted the right to make informed decisions based on accurate food labels.

Americans from all over the country will bring ingredients to make the Stone Soup on the public sidewalk outside the Center for Food Safety and Applied Nutrition between 8:00 a.m. and 12:00 p.m.. Before they add their ingredient(s) to the pot, they will have the opportunity to address you and your staff members in order to express why they want genetically engineered foods to be properly labeled in America. The soup will be 100% vegan and we will compile a thorough ingredient list to show how easy it is to make an honest food label.

We expect some may come to speak about the pending disapproval of the genetically engineered Aquabounty Salmon and we hope staff members will consider listening to these oral comments, as well as accept hand-deliveries for docket FDA-2011-N-0899. As a novel drug that is bypassing the normal clinical research phases that drugs overseen by your administration normally require, there needs to be much more dialog with the American public in order to provide absolute proof that the food adulterants used to produce synthetic meat for human consumption are safe enough to not require mandatory GMO labels.

While we have asked everyone to bring their own bowls and spoons so that our picnic will not generate unnecessary waste, we will bring you and Michael Taylor your own bowls & spoons because we genuinely desire your presence. Our upcoming picnic has a purpose that we hope you and your staff members will fully acknowledge and embrace, which is Americans want the FDA to require GMO labeling. Moreover, we hope your staff members feel empowered to engage in a friendly dialog with us over a bowl of delicious Stone Soup.

By offering you organic food, we are not trying to bribe you or your administration in any way. Rather, we wish to speak with you through the act of sharing of a communal meal. Our sharing of food is symbolic of our peaceful demonstration of free speech, and thus an expression of one of the myriad fundamental freedoms we cherish as citizens. We hope you feel welcomed by our invitation, and that this letter inspires you and your staff to join us in the spirit of camaraderie between fellow eaters.

Last year, 55 members of Congress wrote you a similar letter that said:

“The FDA has the opportunity and authority to do right by the American public. When issuing its rule requiring radiated foods to be labeled, FDA stated in broad terms that a decision to require labeling is not just based on the physical changes to the food but also on whether consumers view such information as important, and whether the omission of label information may mislead a consumer. The fact that the FDA has already adopted this broad interpretation of “material” facts demonstrates that [GMO labeling] is a reasonable – and therefore permissible – interpretation of the Federal Food, Drug, and Cosmetic Act (FFDCA).”

We are unaware of any official reply that was generated from your administration. Before we arrive on Monday, April 8, to prepare the Stone Soup, we would love a response posted on the FDA website because, frankly, we are really hungry for some answers.

See you on the sidewalk.