[Russia Today] Behind the scenes: Undercover shareholder pushes for transparency at Monsanto

Behind the scenes: Undercover shareholder pushes for transparency at Monsanto

­About a dozen protesters calling themselves Occupy Monsanto spent several hours near Monsanto’s headquarters in Creve Coeur, Missouri as shareholders voted on members for the company’s Board of Directors.

The protesters called for more transparency in the multinational company’s operations especially in labeling, research and business practices.

Adam Eidinger who owns 75 Monsanto shares read his speech to the protesters before heading to the meeting to address shareholders with a statement on behalf of Pesticide Action Network, the company, which submitted the study on potential risks of using GMOs.

RT: You are a Monsanto shareholder, so you’re obviously interested in the company making a profit. But you are planning to speak on behalf of the company which submitted the study on the potential risks of Monsanto products. Why are you doing this?

AE: Well the resolution we had would have required a report to be written that could be shared with researchers and scientists across the globe about the risks that they know – the company knows already – about their genetically modified crops. Which many safe food activists believe make us more reliant on herbicides and chemicals that the company also sells. And these chemicals may be what’s causing higher rates of cancer in industrialized nations across the globe.

We know how it caused tumors in rats that were fed in long term studies last year. Dr. Seralini’s study was a topic during this shareholder meeting, I brought it up. I was able to speak during the meeting.

And this meeting was closed to the public, as you said. And one of the things we are asking for is in the future this to be live-streamed.  People around the world care about what’s going into the food. They may not want to own Monsanto stock.

I only bought the stock so I could speak at this shareholder meeting.

RT: A Chinese economist has criticized Monsanto for controlling the country’s soybean market and trying to do the same with corn and cotton in the country. How is this impacting local farmers?

AE: It devastates local farmers time and time again. We’ve seen countries where Monsanto has introduced ‘patented’ technologies, I like to call it. And they only provide hybrid seeds to farmers who then loose bio-diversity, loose varieties that have actually adapted to that area.

What we need on this planet is better distribution of food and we need better organic methods to be shared with farmers, not more reliance on chemicals and pesticides.

And now, it was quite alarming at this shareholder meeting, there are these new technologies where they are going to be modifying insects and viruses and introducing these novel viruses into the environment to handle pests, to kill pests.

We wonder why bee populations around the world are plummeting – it’s because of these chemicals and possibly because of this new technology.

RT: In 2009, Monsanto was accused by the US Justice Department of breaking anti-trust rules. But in 2012 the inquiry was closed without taking any enforcement action. Why?

AE: I think Monsanto is a perfect example of regulatory capture where an industry captures the levers of government, levers of our democracy that are supposed to protect us from companies that would profit over our health being impacted in a really negative way. I mean people may be allergic to these crops, to the chemicals that are used on them, and they are trying to avoid them. And in America they have no right to know if the food has been genetically modified or not. And that is something I brought up at the meeting, if you want to be transparent you ought to label the food.

So yes, you have people at the FDA like Michael Taylor who is the head of food safety who also was the vice-president of Monsanto for a decade and prior to that worked at the FDA as well. So it’s a revolving door, he was at the FDA, went to work for Monsanto and now he’s back at the FDA. It’s clear that secretary of state Clinton, she emphasized giving these hybrid seeds to Africa, yet there’s no proof this is going to help African farmers. I think quite the contrary – they are going to become dependent on buying seeds from the United States when they should be able to save their seeds and develop their own varieties in Africa. 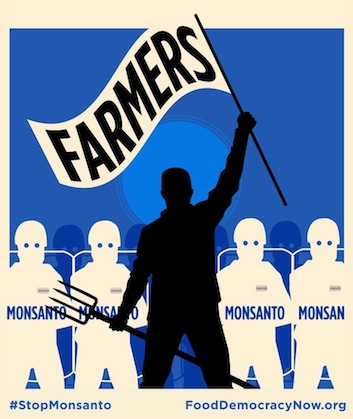