END_OF_DOCUMENT_TOKEN_TO_BE_REPLACED

One of the most important legacies of the Occupy movement has been the sustained, focused campaigns that have emerged from the broad, diffuse protests that captured the world’s attention last fall. Occupy the SEC has kept up the pressure for the Volcker Rule, while Occupy Colleges is determined to end the student debt crisis.

Another powerful example is the expanding network known as Occupy Monsanto, which has emerged over the past eight months staging numerous protests at companies connected to the global trade of genetically engineered foods, known as GMOs.

(GMO foods are organisms which have had specific changes introduced to their DNA using genetic engineering techniques. The plants produced by Monsanto’s seeds are designed to be treated with toxic herbicides and pesticides, chemicals which have been suspected to increase allergies and have been linked to decreased fertility, asthma, organ failure and even, possibly, cancer. The jury is still out, but Occupy Monsanto sensibly argues that vegetables are fine the way nature intended them, and that Monsanto is devoting far more research to the financial metrics of GMOs than to the health implications.)

Trying to sustain its focus, Occupy Monsanto recently announced that it will organize a full week of protests in St. Louis, home of the Monsanto Corporation, on the anniversary of OWS, September 17, 2012. The protests based on the idea that Monsanto’s push to control agriculture poses a great threat not only to consumers in the United States but to farmers and communities throughout Latin America, Africa and Asia, will call on US legislators to mandate the labeling of GMO food, so consumers can decide whether to ingest these products or not.

Occupy Monsanto aims to aggressively confront and expose the industrial agriculture system head-on. “There is something wrong when a chemical manufacturer, the same company who made Agent Orange, controls the US food supply,” said activist Jaye Crawford.

“Wall Street and the American political elite have underestimated and even ignored our potential to effect rational policy change on GMOs which would include labeling for GMOs and restrictions on GMO cultivation,” says Gene Etic an anti-GMO campaigner based in Washington, DC. “If Occupy Monsanto’s anti-GMO actions are successful, after September 17 the media and increasingly more voters will ask tough questions about these experimental GMO crops especially within the context of the presidential election, as that office holds the power to determine American food policy,” says Etic.

The protests will vary in size and nature but are unified in rejecting the legitimacy of GMO food. Check out this interactive map with times, dates and locations of the more than sixty protests organized so far. 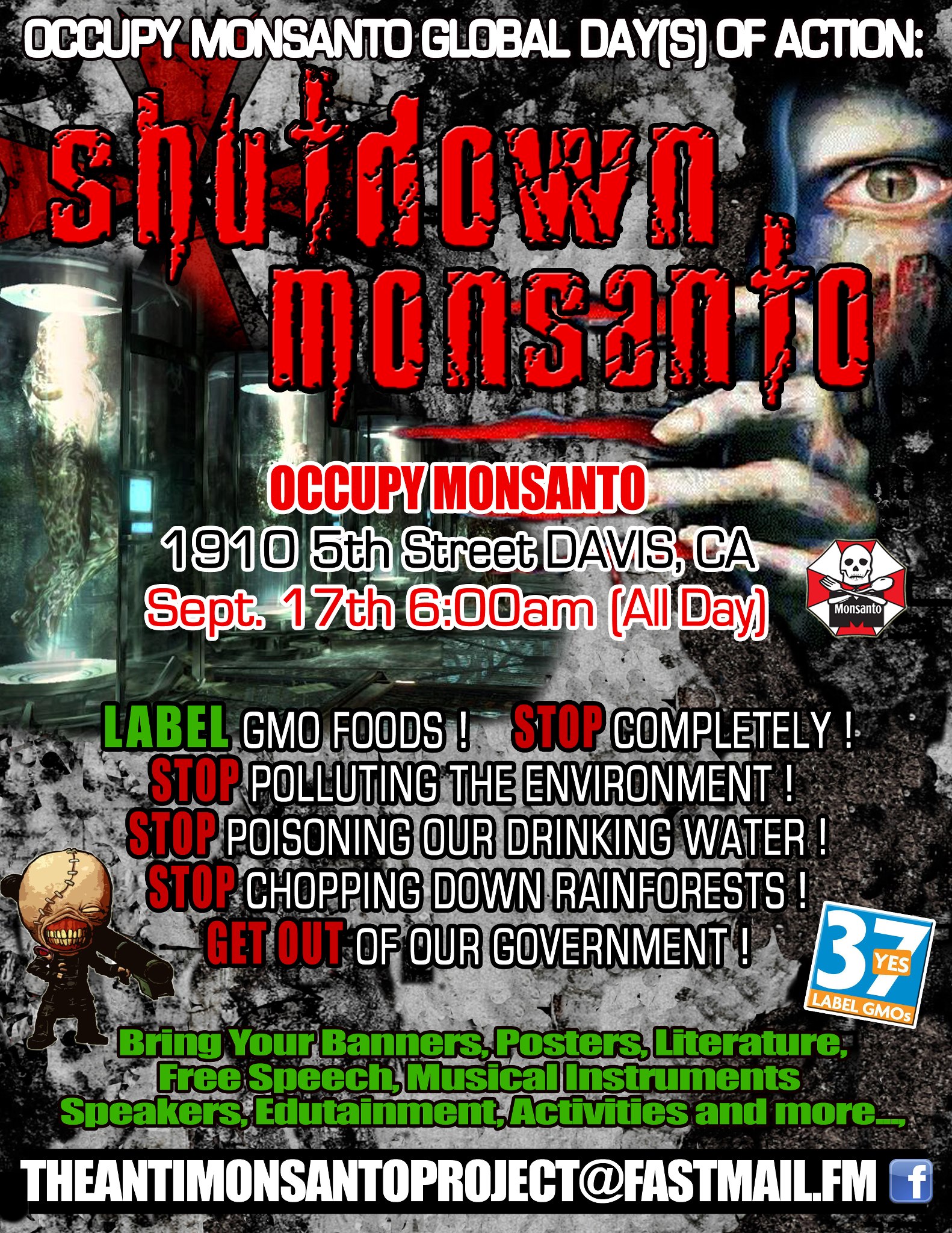