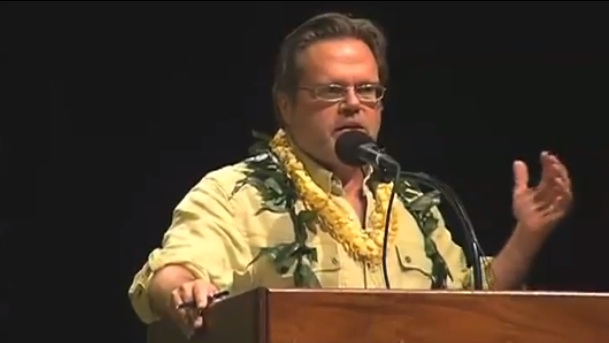 By Laurie Cicotello – The Garden Island

LIHU‘E — Wendell Berry once said, “To live, we must daily break the body and shed the blood of Creation. When we do this knowingly, lovingly, skillfully, reverently, it is a sacrament. When we do it ignorantly, greedily, clumsily, destructively, it is a desecration. In such desecration we condemn ourselves to spiritual and moral loneliness, and others to want.”

Berry’s quotation resonated the most during the evening, with Dr. Shiva also paraphrasing it before announcing that she would return to Kaua‘i, “only when you have driven those criminals off this island.”

In introducing Ritte, emcee Nancy Redfeather of Hawai‘i noted his work in 1975 reclaiming Kaho‘olawe from the U.S. military, which was using it for target practice.

She also recalled watching him and his two sons testify to stop a company from doing biological drug testing in Hawai‘i and how they successfully blocked the effort.

“On Moloka‘i, we are fiercely protective of our natural resources,” Ritte said. “We have a cash economy and a subsistence economy and we need both to survive.”

He said some islands have lost one of those economies and people get by on a cash economy.

On Moloka‘i, though, he said, “We fiercely protect the environment because that’s how we feed our family. The skills that allow us to harvest these resources and feed our families are traditional skills. Monsanto is the No. 1 problem we have right now.”

He said Native Hawaiians are asking him ‘We have sovereignty and rights to take of, why are you wasting your time on GMOs?’

For him, the answer boils down to food sustainability.

“If we are not going to learn how to feed ourselves, we are never going to be independent, self-sufficient and sovereign, never. Never,” he said.

Ritte described having the doors shut on protesters last year during an anti-GMO rally at the State Capitol.

“It was a horrible feeling,” Ritte said. “These elected officials have joined the corporations. They have declared a war on our environment and this island has the most to lose, because it is the most beautiful island in all of Hawai‘i. You have the most to protect.”

He said his job for the evening was to instill in the audience the idea that talk alone would not solve problems.

“If we don’t do anything, we are going to lose. We need you to participate in government,” Ritte said.

He praised the efforts of the Hawai‘i SEED leadership in getting people involved on both leading a three-mile march from UH to the Capitol on O‘ahu and in filling the entire facility on Kaua‘i.

“It’s these women who have all this energy and commitment. Holy burning on my ballbearings, I cannot keep up with this group,” Ritte said to applause. “The leadership right now coming from Kaua‘i is ahead of any other island. No other island can fill rooms like this. The leadership is coming from your island. You guys are in the lead, just like you were on the Superferry.”

Ritte also addressed the issue of the Public Land Development Corporation, calling on Gary Hooser to take the lead on making changes. With the changes in House leadership, Ritte said the doors are open to affecting change statewide.

Ritte said yesterday marked the 120th anniversary of the overthrow of the Hawaiian monarchy. He said the issue needs to be made pono, to be corrected in order to move forward.

“If you build the foundation of how we’re going to protect our environment, using the most powerful laws in the state, it’s not going to be just the Hawaiians rising up. It’s going to be all of us joining up and rising up together because of the love we have for future generations,” he said.

In thanking the crowd for allowing him to share his mana‘o, he said, “We are all here because we love our environment and we love our Islands. We need to protect them come hell or high water.”

Kimbrell opened his talk by paying homage to emcee Nancy Redfeather and her work in the legislature and to Jeri Di Pietro, president of Hawai‘i SEED.

He shared a story about Walter Ritte after he stopped the genetic engineering of taro. A group was sitting around trying to figure out the next step and Kimbrell suggested the company might try to patent taro, to which Ritte replied, ‘They can’t patent my older brother!”

The next thing Kimbrell knew, Ritte and his Hawaiian warriors chained themselves to a building where the Regents for the University of Hawai‘i was meeting to give up the patents they had on taro, which ultimately they did.

Kimbrell said he met Dr. Vandana Shiva in 1989 at the first global warming conference for NGOs. He said the “beauty and nobility of her presence” immediately drew him to her.

He said that during that first meeting, Dr. Shiva said that in India, her people “have for millennia lived, more or less, in harmony with the world, but here in the West, in less than 150 years, you’ve created almost a terminal threat to the planet. So from now on at this conference, why don’t we call you the underdeveloped world?”

Kimbrell fired off a long list of products his group has stopped, including the Flavor Savor genetically engineered tomato to wheat, alfalfa, sugar beets, slo mo grass, rice, even biopharmaceuticals.

“Monsanto can be stopped. We were outspent 20:1 by Monsanto and won,” Kimbrell said to applause, adding that it’s not a matter of “if we’re going to have labeling, but when.”

He described writing Proposition 37 in California, and how they lost the proposition 51 to 49. He said Monsanto spent $50 million and only won by a narrow margin.

“I love suing Monsanto,” Kimbrell said in discussing gene and patent cases heading to the U.S. Supreme Court. “It never stops them from being passive aggressive cause we just get to sue them.”

He noted there are five major companies equal to Monsanto including Dow Chemical, DuPont, Syngenta and Bayer.

The crowd loudly tried to correct him, shouting out “Pioneer!” to which Kimbrell reminded them that Pioneer is a subsidiary of DuPont.

Monsanto, DuPont and Syngenta own 51 percent of the world’s seeds, he said.

The seeds are designed to withstand huge applications of pesticides, which the same companies sell, Kimbrell said.

“2,4-D is one of the elements in Agent Orange. So then they start a chemical arms race because Monsanto says they are going to go with Dicamba,” Kimbrell said, adding that these crops are currently up for USDA approval.

Kimbrell said Dicamba is one of the most terrifying weed killers as well because it volatilizes. “That means that under certain warm and wet conditions, it comes back up in a cloud after it’s been sprayed and can move miles over an organic farm and kill everything there. We’ve had conventional farmers say they don’t want this thing, so our work is not done.”

He went on to say “one of the most troubling things for me” is that the FDA is currently finalizing the approval of genetically engineered salmon.

“The salmon was originally engineered with human growth genes to make it grow larger, faster, and now they put some pout genes to do the same thing,” Kimbrell said.

He added that researchers said it would take a very small number of these salmon to decimate all salmon.

“Sixty fish like this, if they are released into a population of 60,000 native salmon, can cause extinction in thirty generations,” Kimbrell said.

He said there are about 45 days left for people to contact the FDA and tell them not to approve the fish.

Kimbrell added that 1.25 million people so far have signed a labeling petition asking President Obama to label GMO foods and said it is the largest response the FDA has ever had.

Based on the passion shown for the petition, Kimbrell encouraged the audience to have passion for their convictions.

Kimbrell once got called out for being against progress, but offered that the question needs to be “progress toward what?”

“The U.N. just came out with a report that said the way we are going to feed the world is not through genetic engineering, is not through toxic inputs, is not through pesticides, is not through the 2,4-D and the Dicamba and the RoundUp that is in the dust on Moloka‘i and hurting and killing children on this island. We know it’s the toxic herbicides. That is not progress. That can never be progress,” Kimbrell said, adding the companies are destroying the Earth and making “zillions of dollars” in the process, all in the name of progress. “We’ll occupy progress,” he said.

He said biotech companies would like for people to remain passive consumers, but noted that Ritte said everyone is a creator capable of making decisions, “in the food we grow, the food we buy, the food we feed out children, the food we allow in our schools and in our communities is either going to progress this terrible mechanistic nightmare that’s now reached it’s endpoint in the actual engineering of the seed to be intolerant to these horrifying toxins and poisons or be organic and beyond, which is the fastest growing sector in American agriculture that is organic, local, appropriate scale, humane, socially just and biodiverse.”

Kimbrell encouraged the audience to be creators by getting involved to no longer be part of the desecration as described by Wendell Berry.

In the end, he encouraged the crowd to come together in the food movement.

“As you fight every battle here, I hope you all together, in cooperation, in love, can knowingly, skillfully, lovingly and most important reverentially, come together to create a new food future.”