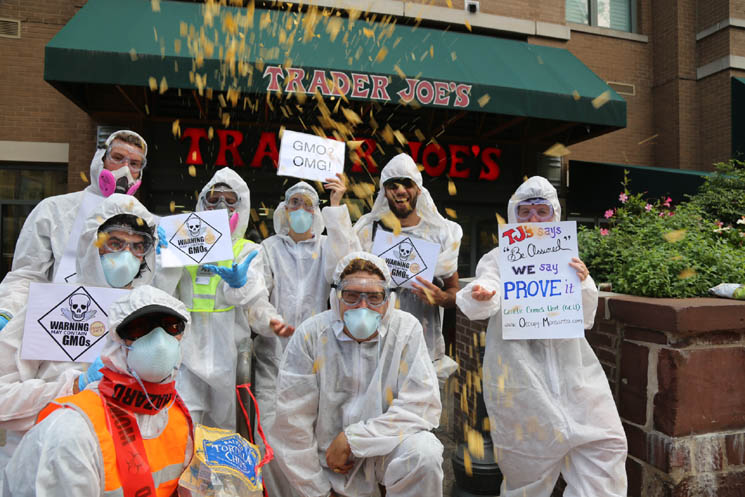 END_OF_DOCUMENT_TOKEN_TO_BE_REPLACED

The fact is no supermarket in America is immune to genetic contamination.  Some grocers & natural food stores work with their customers to prevent this ghastly invasion of our food supply.  Trader Joe’s simply says "Be assured."

You’ve probably heard that before from Monsanto’s minions in the form of "Trust us," and you’ve probably learned that trust & assurances are earned. According to Trader Joe’s website, we should just blindly be assured that there are no unlabeled GMOs on their shelves:

Our customers can be assured that all products in Trader Joe’s private label are sourced from non-genetically modified ingredients. Our efforts began in 2001, when we determined that, given a choice, our customers would prefer to eat foods and beverages made without the use of genetically engineered ingredients. Our process has been to identify any product containing ingredients that could potentially be derived from genetically engineered crops and work with our suppliers to replace offending ingredients with acceptable alternatives.

So what assurances do we really have?

According to Fortune’s "Inside the secret world of Trader Joe’s" article from 2010, Trader GMOs private label brands are made by companies who regularly use GMOs in their products. We also know that TJ’s parent company, Aldi, uses GMO ingredients in their low-cost food products throughout America.

Trader Joe’s does not have any sort of standard or system in place, nor does it perform any testing for GMOs.

Unless Trader Joe’s can provide proof that their private label brands are free of Monsanto’s GMOs, the genetic contamination at their stores will be exposed by local Genetic Crimes Units throughout America during the last weekend in July.

If your Genetic Crimes Unit is interested in taking part please email incident@Occupy-Monsanto.com with the Time, Date, & Location and we’ll add it to the listing. This is a great opportunity to recruit members for your Genetic Crimes Unit and inform people in your community about the global week action against Monsanto in September.   Be sure to take photos & video while you shop for the truth.

The methods of exposing Monsanto’s mutilated genetics will vary. Some stores may get the Label It Yourself treatment, other stores will see genetic crime scene tape unfurled in front of the store. Some stores will be enlivened with scenes of street theater and flash mob dance crews.  How to shop for the truth is up to you & your GCU.

Trader Joe’s has hundreds of locations throughout the United States to choose from, but if there isn’t one nearby, consider making a visit to your nearest chain grocery store.

Drop the Money Bomb on Monsanto

This article by Dr. Mercola was published earlier this week on the Huffington Post.

Something Historic Is About to Happen

I’m pleased to announce that the Money Bomb Against Monsanto has been officially launched!

Yes, it is official. Volunteers and staff from the California Right to Know Campaign are submitting nearly 1 million signed petitions from registered voters across the state of California to county officials, to place the Right to Know Genetically Engineered Food Act on the ballot for Nov. 6. Starting May 1, and extending through May 26, a broad coalition of farmers, health groups, and organic food manufacturers will attempt to raise $1 million (i.e., “the money bomb”) to support state GMO-labeling campaigns and their defense from biotech bully lawsuits.

This act will require food manufacturers to identify genetically engineered ingredients on the labels of foods sold in California.

When California voters pass this ballot initiative, the Label Genetically Engineered Food Act will also prohibit the common practice of mislabeling genetically engineered foods as “natural” or “all natural.” It’s imperative to understand why this initiative is so important and how it can affect all Americans, regardless of where you live. California has the eighth largest economy in the world, so passing a labeling law for genetically engineered foods in California can have the same impact as passing a federal law.

Large food companies are unlikely to accept having dual labeling, one for California and another for the rest of the country. It would be an expensive logistical nightmare, not to mention a massive PR problem. To avoid the dual labeling, many would likely opt to not include using any genetically engineered (“GE”) ingredients in their product, especially if the new label would be the equivalent of a skull and crossbones. Those who opt not to replace GE ingredients from the get-go will likely find themselves unable to sell their products, as a majority of consumers reportedly will not buy foods once they know they’re genetically engineered. Unable to sell their products, such companies will eventually be forced to stop contaminating our food with genetically engineered ingredients or risk going out of business. This is what happened in Europe and over 40 countries around the world. It can happen in the U.S.

The Proverbial David vs. Goliath

Naturally, the biotech industry is not about to let this pass without a fight. Monsanto, the Farm Bureau, the Grocery Manufacturers Association, and corporate agribusiness are all raising millions of dollars to spread their propaganda in an effort to defeat the California ballot initiative, just like they did a decade ago in Oregon. At that time a cabal of corporate giants, including Monsanto and DuPont, calling themselves the Coalition Against the Costly Labeling Law, outspent the pro-labeling group 30 to 1 and successfully defeated the labeling initiative by scaring voters into believing that labeling genetically engineered foods was unnecessary and would raise food prices.

They did it again in the state of Washington last month, where campaign contributions to three of the eight politicians on the Senate Agriculture Committee (Democrat Brian Hatfield and Republicans Jim Honeyford and Mark Schoesler) guaranteed the bill’s demise in committee. Right now the biotech industry is also working to defeat similar GE-labeling bills in Vermont, Hawaii, Connecticut, and other states. According to the Union of Concerned Scientists, Monsanto spent $8 million on their lobbying efforts in 2010 alone and gave more than $400,000 in political contributions. Monsanto also spent $120 million on advertising, to convince consumers that genetically engineered foods are safe — despite scientific evidence suggesting otherwise.

Let’s send them a message loud and clear: We have the right to know what they put into our food!

About 20 years ago, the FDA decided to deny consumers the right to know whether their food was genetically altered or not. This shameful regulation was spearheaded by Michael Taylor, a former Monsanto lawyer who transferred into the offices of the FDA. Taylor is not the only ex-Monsanto employee who ended up in a position of power within the U.S. federal government and its regulatory agencies, and this is precisely why previous efforts to get genetically engineered foods labeled have been blocked.

Not so this time!

Ballot initiatives like the one in California are one way for citizens to take back control from compromised politicians and government officials and bypass them entirely. To sweeten the deal further, a group of “Right to Know” public interest organizations and organic companies has pledged to match the first $1 million raised in this nationwide “Drop the Money Bomb on Monsanto Campaign.” These “Right to Know” groups include:

Yes, I believe we can! But we need to get the word out, which requires a strong campaign to educate the citizens of California to vote for the initiative on Nov. 6. According to Ronnie Cummins of the Organic Consumers Association, we stand a good chance of winning in California because:

The Time for Action Is Now!

Monsanto is one of the most powerful, arrogant and destructive companies in the world. For decades, they have controlled the world’s food supply by buying off politicians and regulatory agencies, intimidating small farmers, manipulating the outcome of scientific studies, lying to consumers — and threatening to sue states like Vermont if they dare to pass a GMO labeling law.
…
We have the right to know if the food we buy has been genetically engineered. … It’s time to take back our food. Our farms. Our power. It’s time to show Monsanto what ordinary people like us can do when we come together. It’s time to drop the money bomb on Monsanto.”

Hundreds of thousands of people can help the coalition behind this initiative run a dynamic, effective campaign to bring down Monsanto and the rest of the Biotech Bullies.