Some of California’s dopest graffiti artists — Mear One, Vyal One, Werc, Griffin One, and Ernest Doty — have created high-impact murals to raise awareness for the labeling of Genetically Modified Organisms (GMO). The artists discuss their reasons for supporting California’s Yes on Prop 37 campaign while displaying can control and sick techniques.

i am OTHER Motion Graphics by Syndrome 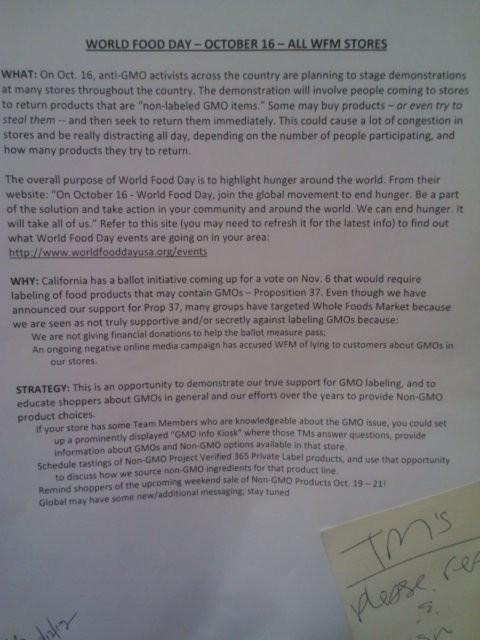 On Tuesday, October 16, food activists around the world will be celebrating World Food Day in a various ways. One of which, will be going to Whole Foods Market and demand the stores stop selling unlabeled GMO foods.

Below is the transcribed text of the memo to Whole Foods Market employees on how to handle World Food Day activism:

WHAT: On Oct. 16, anti-GMO activists across the country are planning to stage demonstrations at many stores throughout the country. The demonstration will involve people coming to stores to return products that are “non-labeled GMO items.” Some may buy products – or even try to steal them – and then seek to return them immediately. This could cause a lot of congestion in stores and be really distracting all day, depending on the number of people participating, and how many products they try to return.

The overall purpose of World Food Day is to highlight hunger around the world. From their website: “On October 16 – World Food Day, join the global movement to end hunger. Be a part of the solution and take action in your community and around the world. We can end hunger. It will take all of us.” Refer to this site (you may need to refresh it for the latest info) to find out what Word Food Day events are going on in your area:
https://www.worldfooddayusa.org/events

WHY: California has a ballot initiative coming up for a vote on Nov. 6 that would require labeling of food products that many contain GMOs – Proposition 37. Even though we have announced our support for Prop 37, many groups have targeted Whole Foods Market because we are seen as not truly supportive and/or secretly against labeling GMOs because:

STRATEGY: This is an opportunity to demonstrate our true support for GMO labeling, and to educate shoppers about GMOs in general and our efforts over the years to provide Non-GMO product choices.

Props to Food & Water Watch for putting their money where the mouth is. More organizations need to get on board the Yes on Prop 37 train. Of course, we’d much rather have all GMOs banned, but labels are better than the status quo.

EVeryman aka Evan from The Boyz In The Wood comedy web series performs Right to Know” & “F Monsanto” with his homie D-Rock: