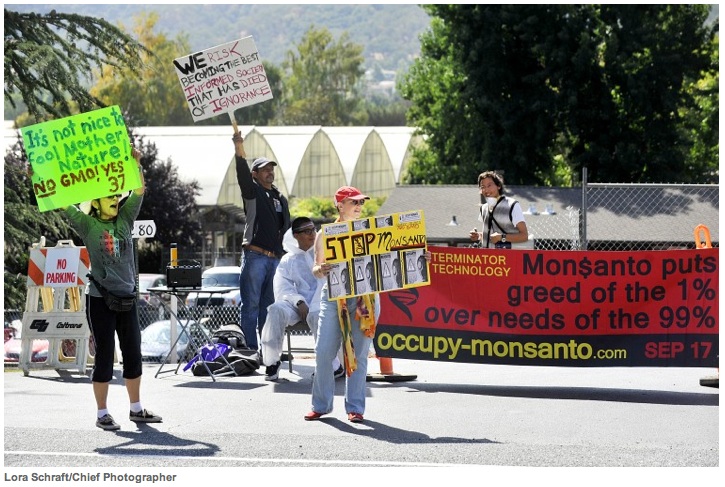 A group of demonstrators who flocked to Syngenta Flowers in Gilroy last week was a modest-sized crew that lobbied against genetically engineered seeds, voicing their stance through colorful signs, chants, stickers, biohazard suits and even a chocolate Labrador named Lady, who wore a sign that declared, “No to GMOs! Dogs don’t like it either.”

Around 15 or so participants carpooled from various parts of the Bay Area to participate in Friday’s all-day peaceful demonstration. Syngenta and city staff anticipated the visitors, who hailed from Morgan Hill, Campbell, Santa Clara, San Jose and San Francisco. Parts of Hecker Pass were previously lined with Caltrans “no parking signs,” while a chain link fence barricaded Syngenta’s parking lot entrance. Four Gilroy police officers kept a watchful eye over the scene from the morning until 2 p.m. Two officers stayed on until 5 p.m.

“This is Goliath, and we are David,” said event spokesman Eduardo Abarca, 24, projecting his voice through a bullhorn toward the Syngenta facility at 2280 Hecker Pass Highway. “You don’t have a right to mess with nature and you can’t control how nature works.”

Formally known as “Occupy Monsanto” in protest of the American agricultural biotech company and leading producer of genetically engineered seeds, the gathering marked the final day of a nationwide “global week of action” against “evil biotech” facilities linked to the Genetically Modified Organism food system.

Protesters decided to demonstrate in Gilroy since “there wasn’t a Monsanto facility that we could find near San Francisco.” Staging a demonstration at Syngenta is just as legitimate, the group maintained, as the company also breeds, manufactures and sells genetically modified vegetable seeds that ultimately make their way into the food system.

While the local Syngenta facility in Gilroy doesn’t actually sell or manufacture vegetable seeds or vegetable plants – it’s a flowers-only operation – the Swiss biotech giant that employs more than 26,000 people in more than 90 countries is currently the world’s No. 2 vegetable seed proprietor, according to its website.

Abarca and company protested against Genetically Modified Organisms known as GMOs, as well as the absence of FDA regulations that require GMO food labeling. Biotechnology labeling is not required by the Food and Drug Administration, although it has been adopted by more than 40 countries, including New Zealand, parts of Asia and Australia and most of Europe.

Genetically engineered seeds, such as those manufactured by Syngenta, “are tailored for individual geographical regions to be high-yielding and reliable,” as well as “genetically enhanced with built-in insect resistance or herbicide tolerance,” according to Syngenta. Farmers may opt to use these types of seeds, which can be more efficient and yield a higher output. Some common examples of GMO crops include corn, soy beans, sugar cane, rice, cotton, vegetable/canola oil, as well as vegetables that have been genetically modified to remain fresher longer, and thus have a longer shelf life in grocery stores.

Arguments against genetically engineered seeds include: Risks to human health and the environment, GMO seeds being too expensive, resistant to weed killer, and genetically contaminating traditional crops – which are important to organic farmers, as well as conventional farmers who export crops to other countries that reject genetic engineering.
Syngenta, on the other hand, contends that “genetically modified food and feed products are the most extensively tested and regulated in the entire food sector,” according to Senior Communications Manager Lori Schwind with Syngenta Corporate Affairs, North America.

“Testing by independent public authorities and scientists throughout the world, including national and international food standards bodies, continues to demonstrate that approved genetically modified plants are just as safe as conventional varieties,” according to a company statement issued Monday by Schwind.

Activists touted signs with messages such as, “We risk becoming the best informed society that has died of ignorance” and, “It’s not nice to fool Mother Nature! No GMO! Yes 37!” in reference to Proposition 37, the “California Right to Know Genetically Engineered Food Act.” The measure to make GMO food labeling mandatory in California is one of 11 statewide initiatives that is on the Nov. 6 ballot.

Monsanto and Syngenta are listed as donors to the “No on 37” campaign.

Genetic tinkering and the subsequent denial of the public’s “right to choose what we put into our bodies” prompted Campbell resident Robert W. Groff, 58, to participate in the Syngenta protest.

“I don’t think multinational corporations should be dictating our food chain,” said Groff, who has a master’s degree in engineering. “It’s not the right way to do things.”

Participant’s ages were as mixed as their origins. One of the younger protesters included 14-year-old Saul Navejas, who donned a white biohazard jumpsuit.

Abarca also wanted to bring awareness to the fact that Syngenta manufactures an herbicide called Atrazine, “one of the most commonly detected pesticides that we find in our water,” he claims.

“If it’s so good for you, what do you got to be afraid of?” queried San Jose protester Joe Cernac, 64, who sat on the highway curb and played his harmonica while holding a sign that read, “power to the people.”

Cernac trekked to Gilroy Friday because he believes the fine print of food labeling is an “issue.”

“People need to know what’s in the food that they’re buying,” he rationed.

It’s a source of deep concern for Morgan Hill resident Loya Jackson, 58, a retired GUSD teacher of more than 18 years.

“I am passionate about what GMOs are doing to kids,” says Jackson, who claims asthma, allergies and Attention Deficit Hyperactivity Disorder have proliferated in the classroom.
“Talk to any teacher and we are beside ourselves with allergies,” she said, taking a break from chanting anti-GMO slogans through a bullhorn. “We have tons of EpiPens hanging in our classrooms.”

The EpiPen is an auto-injector for the emergency treatment of life-threatening allergic reactions.

Protesters argued that a lack of GMO food labeling is a direct impediment to “food sovereignty,” something 78-year-old Santa Clara resident Joan Bazar defines as “the right for people to have control over the source and type of their food.”

A former copy editor for the San Jose Mercury News, Bazar belongs to the Women’s International League for Peace and Freedom. She gathered video footage of Friday’s gathering for a documentary project on the global food crisis.

Giant corporations such as Monsanto and Syngenta “crowd out the local food production,” she argues.

“Monsanto and companies like them are dominating our food supply and contaminating our bodies,” echoed KateAnn Riser, 62, of Campbell. “If we don’t stand up and be counted, then we have no right to complain.”

Syngenta contends the company is helping to “protect the environment and improve health and quality of life,” the company states. “This includes agricultural biotechnology, which can improve crop productivity and yields and produce higher quality crops. If food production is to increase to meet projected population levels over the next few decades, GM and other biotechnologies must be available to growers as an option.”