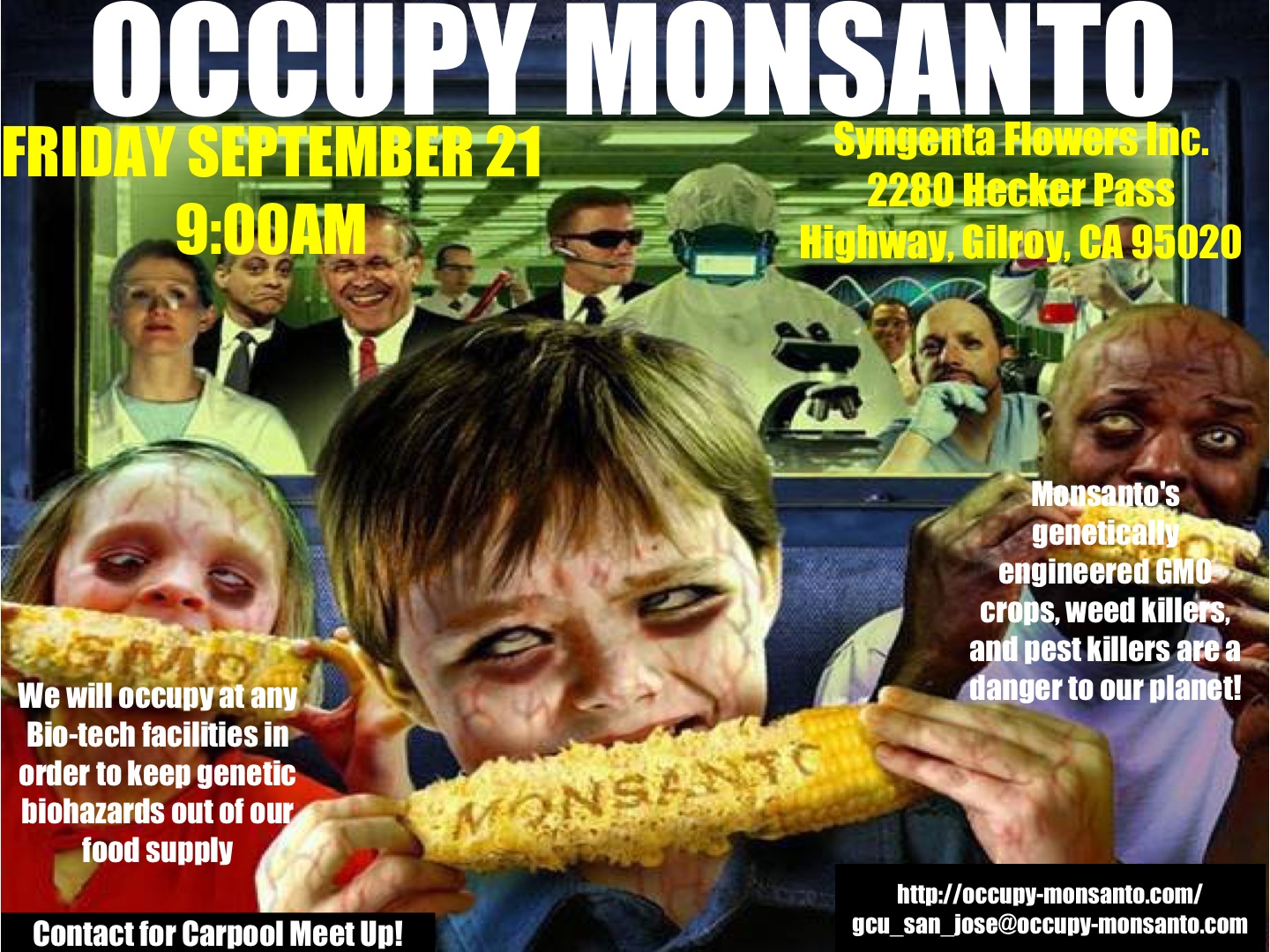 Monsanto is the largest producer of GMO seeds and is being called out for their genetic crimes by a network called Occupy Monsanto. Today’s protest is the beginning of a series of over 65 different autonomous actions that officially start on September 17, a year since Occupy Wall Street movement began. Actions are planned throughout the world including the US, Germany, Canada, India, Paraguay, Philippines, Poland, Argentina, Australia, Spain, Russia, and Japan. More info as well as video available for media use of today action can be found at https://Occupy-Monsanto.com. Attn: Please Credit Video to Occupy Freedom LA

After occupying all three shipping and receiving entrances to the Monsanto facility using flashy theatrics including a car with a giant “fish-corn” on top of it and a 6-foot high jail cell complete with someone dressed up like the CEO Hugh Grant of Monsanto inside. Eventually after 5.5 hours the fire department was called in and 9 anti-GMO activists were arrested and charged with trespassing.

“The reason I am occupying Monsanto and willing to put myself at risk of arrest is because Monsanto has genetically engineered food crops to contain novel untested compounds that result in more weed killer sprayed on our food, without informing consumers. Unlike most industrialized countries including every country in Europe, Japan and even China, in America right now there are no labels on our food informing us whether we are eating GMOs or not. We have a right to opt out of this experiment: it’s not up to chemical companies what I feed myself and my family. Monsanto has bought and sold both parties and has handpicked henchmen at FDA and USDA making sure we are kept in the dark. Monsanto is also currently fighting the California Prop 37 GMO labeling initiative that would give consumers the right to know if they are eating GMO foods. said GCU member Ariel Vegosen.

The GCU arrived onsite wearing bio-hazmat suits and with giant banners saying the “99% V. Monsanto” and “Seminis and Monsanto bringing weed killer GMO food to your table.” Next week there will be more protests all over the nation.

“In the name of Wall Street profits, chemical corporations such as Monsanto genetically engineer crops to withstand high doses of their toxic weed killers that contaminate our food and water, and have not been proven safe. We deserve to know what we are eating and we should put the GMO crops back in the lab and off the kitchen table.  The US chemical lobby has so far made sure Americans are kept in the dark and we are tired of inaction by Obama, “ said GCU unit member Rica Madrid.

“We are here today in civil disobedience because we believe strongly that we have no other option,” said GCU unit member David Pillar. “Its time for healthy food now.”

On Sept. 17, 2012 Occupy Monsanto is calling for hundreds of actions internationally, https://Occupy-Monsanto.com